As the year wraps up and the Best of 2014 lists pop up everywhere, I felt it was a good opportunity to make up for my slackness on the blog front. So here’s a quick look at my roller coaster 2014!

Work wise there were ups and downs, and then more ups and downs. At the start of the year I was supposed to move into a logistics coordinator role. After putting $100 on the bar for my leaving drinks and looking like an absolute tosser by having a cry on the morning of my last pre-start meeting, the role was canned four days before I was set to start. Going back to work and explaining to people what had happened (when I myself didn’t even know what exactly happened) was beyond exhausting. Thankfully I was able to take some time off to recharge and reset my brain. Mind you, even now – 10 months on – I still get queries about what happened to that role.  Luckily hindsight is a marvelous thing and now looking back, I am glad the role didn’t happen; I wouldn’t have learned a lot of things I now know and I would have missed out on honing a whole range of skills had I changed roles. Although the cleaners waking me up at 10am when I am on night shift is something I could have done without…

I have been trained on how to use the Rock Breaker and how to operate a Bobcat. I have ran the Crushing and Grinding circuit by myself – I know, I still struggle to get my head around the fact that I am allowed out in the plant unsupervised! I have trained newbies with more operating experience than myself and even had the words “senior area operator” pop up in my appraisal. Big year, right?

I have nearly tipped myself over on the Bobcat, it took everything I could muster to keep going rather than chicken out. I have kind of mastered the art of shoveling and hosing (on some days at least, most days I still hose myself).  Through the year I have also had the privilege of getting to know some of my crew a bit more and strengthen friendships.  I have also managed to annoy certain people, which makes things interesting and super fun at times

Even though I have learned a lot more this year in terms of the plant and being an operator, I am most proud of the hard yards I have put in the gym and in improving my health overall. In April 2014 I stared going to the gym. Luckily, I have hard arse (HA) Harry and the lovely Miss Andylicious on crew. They are dedicated lifters and HAHarry is a pro who is more than happy to shower anyone who will to put the hard yards in with his extensive knowledge and expertise. Training with them feels like having my own personal cheering squad too as they are not only excellent teachers but top motivators. Every little achievement is celebrated and acknowledged – even my nine kilogram bicep curl in October was a highlight for all (but mostly for me of course)!

I have never been a gym junkie.  NEVER! I have had numerous lapsed gym memberships in the last 10 years. I gave up on the treadmill in 2002 when I nearly face planted because I was too busy talking to my friend next to me. So the change this year has surprised me most of all! Even now, months down the track, I still feel like I am having an out of body experience when I drag myself to the gym at 3.30am. I used to think people were crazy for doing such things! Now when I am at work and we are on days, I go to the gym in the morning for cardio and then do weights at night. When we are on nights, we are already at the gym at 2.30pm. I used to get very annoyed when the cleaners would wake me up at that time but now exercising actually wakes me up more and energises me for the shift ahead. On day shift, the days where I skip my morning sessions are the days I struggle to focus and wake up at work – even if it means I have had an extra hour of sleep.

So, in a nutshell, in my two years as an operator I have been acquainted with two new friends I didn’t know much about prior to this adventure. I introduced you guys to my first friend – manual labour, at the start of this blog series.  Now, as some of you make your New Year’s resolutions for 2015, I introduce you to my new friend – the gym.

By going to the gym regularly and training with some pretty awesome people, I have also changed my eating habits. It just seems like such a waste to gorge on unhealthy food when I have put in the effort at the gym. No, I haven’t cut anything out of my diet. Just listened to HAHarry’s tips and applied them. Treats before 3.00pm, eat smart; basically just thinking about what I am eating rather than mindlessly inhaling a pack of chocolate chip cookies at 10.00pm because I felt hungry.

To those of you who have getting healthy, getting fit, losing weight on your 2015 resolutions list, you can do it! Heck, if I have managed to do it after years of extreme allergic reactions to the gym, any form of exercise and healthy eating, then I don’t see how any of you can’t do the same. It has been a massive shift in mind set and habits, but it somehow doesn’t feel like I have sacrificed anything or I have had to make drastic changes to achieve it. My mindset has changed so much that one of the things I am looking forward to the most in 2015 is doing the Maxine’s Shape Up Challenge (http://www.maxineschallenge.com.au) in February.  This time last year I wouldn’t even have contemplated it. I would have just put it in the too hard/impossible basket and not even bother. Now, I cannot wait to start and to train insane!

What has been my biggest learning so far? Easy! Whatever I set my mind to, I can achieve. That is how I sum up my 2014. I hope every single one of you reading this has had a learning to take away from the last 12 months. I hope 2015 brings more laughter, challenges, learnings, and triumphs for all of us!

As always, thank you so much for taking the time to ready my blog. I really appreciate it. If there is anything in particular you would like to know more of, just let me know.

Here are some other highlights from the last year. I promise to lift my blog game in 2015! Happy New Year to all of you. 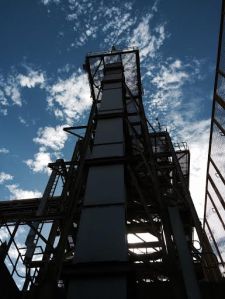